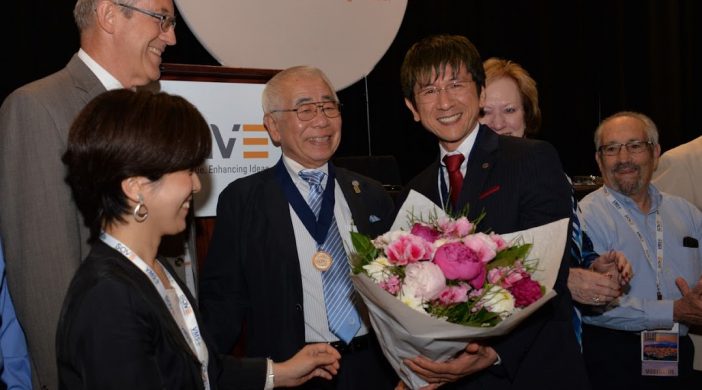 The College of Fellows elected Hisaya Yokota from Japan as the newest fellow of SAVE International. He was recognized at the 2019 Value Summit awards ceremony in Portland, OR this past June. Following is a summary of his experience and contributions to the Value Methodology (VM).

Hisaya Yokota (pronounced Hesāyā Yō-kō-tō) first came to know the VM in 1997. This first-hand experience of its effects on creative thinking was recognized early on by Hisaya. VM offered the necessary techniques for improvement and reform.

From this experience, he tried to apply VM to all public works in Japan and worked within government agencies. He succeeded in establishing a system that applies VM to all public works projects. He set up the industry’s first specialized organization, affecting the entire industry and solving the problems of public works in earnest. Because of this effort, he was featured on a famous Japanese television documentary program. His activities were widely recognized throughout Japan and he received numerous inquiries from radio programs, books, magazines, as well as television programs.

He became convinced that the VM should be applied to all businesses, not just to manufacturing and construction. With deciding to expand variations and methodologies for all companies, he established the Functional Approach Institute. One of his clients, an Italian restaurant chain, which is one of the most famous in Japan, was selected to receive the Miles Award from the Society of Japan Value Engineering (SJVE) in October 2018.

He has participated and presented technical papers at SAVE Value Summits every year since 2003. He has also been an enthusiastic participant in the European and Asian Conferences, bridging the expertise of value methodologies around the world.

He is constantly teaching VM to people that still do not know this methodology via the universities and his own private academy. He is a person who is committed to continuing education without hesitation. For these reasons, he received the Spreading Achievement Award from the Japan Society of Professional Engineers in 2008 and from SJVE in 2010. He received the Paper of the Year Award and the Jimmie Carter Distinguished Service Award in 2017 from SAVE.

Many SAVE members know that he has many amazing achievements and abilities, including his expertise of developing the VM in the service area. Thus, he was selected to be a member of the VM Body of Knowledge, and he offers his experience and knowledge to SAVE.

It is important to note that Yokota-san has a strong willingness to promote the VM now and into the future.

We welcome our newest SAVE Fellow, Hisaya Yokota!